Since CSS Animation appeared, the graphics performance of WebKit has become an important issue, especially in embedded systems world. Many users (including me) want fancy and stunning user interfaces, even in a small handset device which have very restricted CPU and GPU.

Luckily, I could work through the years to improve the graphics performance of WebKit. And with the support from colleagues in Igalia, I just finished to make the Threaded Compositor for WebKitGTK+ as a review-ready state.

Before diving into the detail, it would be good to watch a video which introducing the Threaded Compositor.

Click here if a video does not appear above this text.

The example used in this video can be accessed from here. I modified the original version to run automatically for benchmarking purpose.

Also, the current implementation of Threaded Compositor is available on the github. It is based on the WebKit r176538.

The main-thread is where everything gets executed, including layout, JavaScript execution, and other heavy operations. Thus, running accelerated compositing in the main-thread severely limits responsiveness and rendering performance. By having a separate thread for compositing, we can bring a significant performance improvement in scrolling, zooming, and rendering.

Currently, several ports have already implemented a way to perform compositing off the main-thread. Coordinate Graphics, which is used by Qt and EFL, runs accelerated compositing in UI Process, and Chromium has implemented Compositor Thread that runs off the main render thread.

Threaded Compositor is a threaded model of Coordinated Graphics. Unlike Coordinated Graphics, it composites contents in the dedicated thread of Web Process and doesn’t use complicated inter-process shareable textures. Because of that, it is much easier to implement other multi-threaded rendering techniques which is covered at Compositing the Media and the Canvas.

Compositing a contents using OpenGL[ES] is a basic technique to accelerate CSS animations. However, even we are using GPU accelerated compositing, we can face a V-sync pitfall. ( This happens more frequently in the embedded systems. ) Most of GPU uses V-sync (Vertical synchronization) to prevent the screen tearing problem. It may blocks OpenGL’s SwapBuffer call at most 16 ms - if the monitor’s refresh rate is 60 Hz - until the next vblank interrupt.

As you can see in the below diagram, this problem can waste the main-thread’s CPU time.

Again, when the main thread executing OpenGL[ES]’s SwapBuffer call, the driver should wait V-sync interrupt from the DRM/KMS module. The above diagram shows the worst case scenario. The main-thread could render 6 frames in given time if there was no V-sync problem. But with the V-sync, it renders just 4 frames. It can be happened more frequently in embedded environments which have less powerful CPU and GPU.

Because all of the layer properties (including GraphicsLayerAnimation) are passed to the compositing thread, it can make available to run CSS animations on the compositing thread without interrupting the main-thread. When CoordinatedGraphicsScene finishes to render a scene, it will check is there any running animations in the its layer tree. If there are active one, it sets a timer to render a scene itself.

Attached sequence diagram can be helpful to understand this idea. 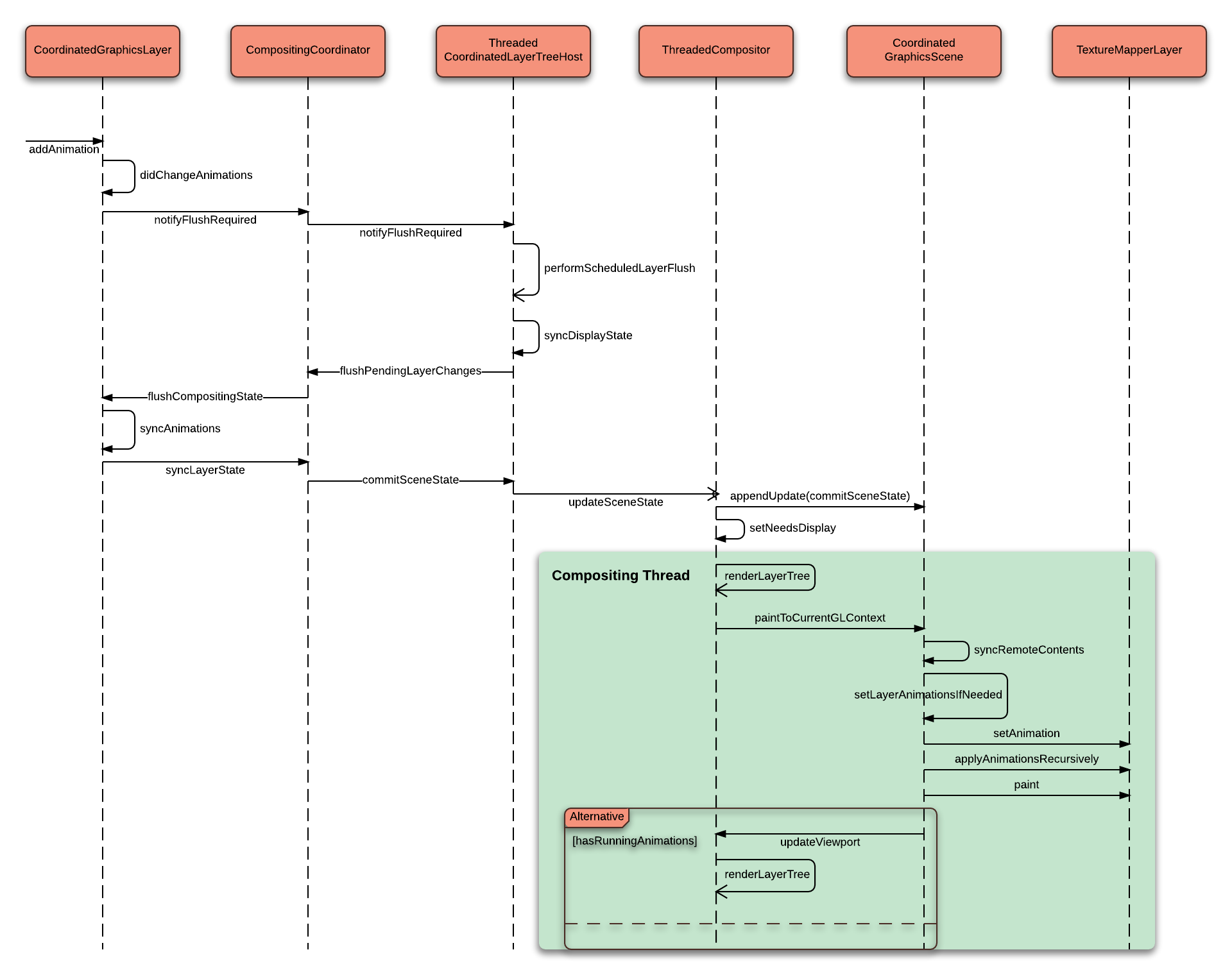 Scrolling and Scaling are also expensive job especially in the embedded device.

When we are scaling a web page, WebCore needs to update whole layout of its web page. As all of us knows, it is really expensive operation in the embedded platform. 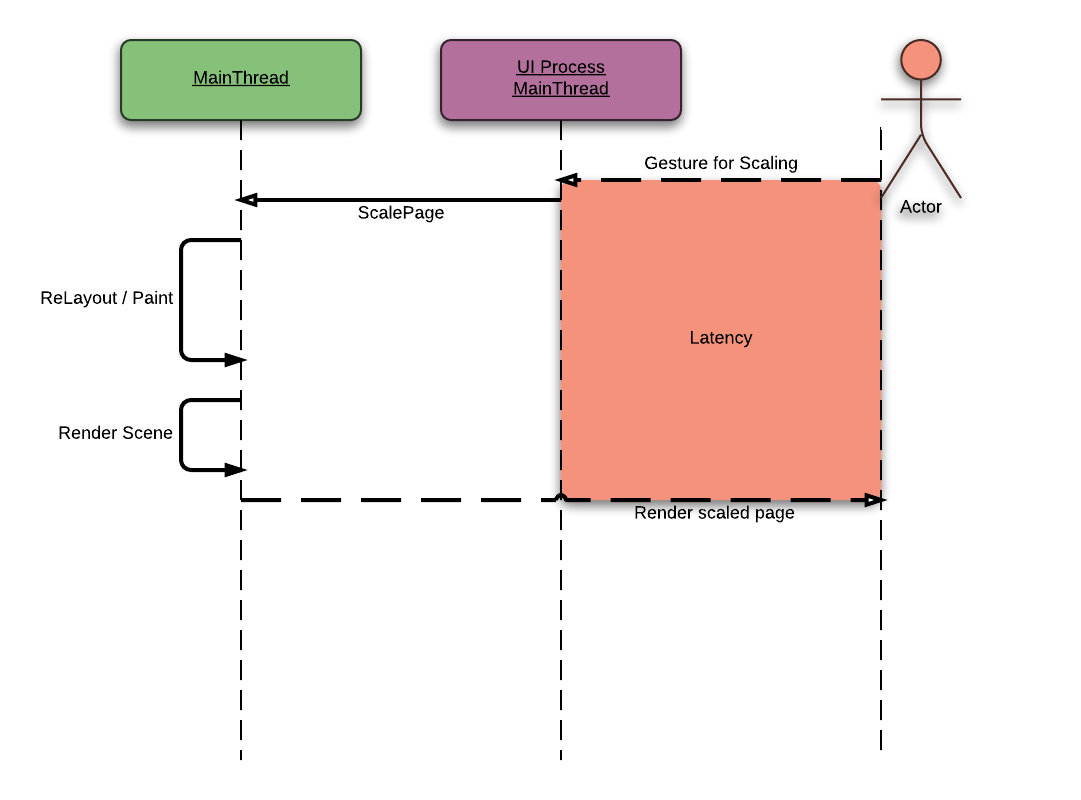 Let’s assume that a user tries to scale a web page using a two finger gesture. The WebCore in the Web Process tries to produce scaled web page with a exact layout as soon as possible. However, if it is a embedded device, it can need more than 100 ms - 10 fps.

The Threaded Compositor renders a web page with a requested scale using its cached layer tree. By doing like that, we can give a immediate visual feed back to the user. And re-layouted web page will be updated later. 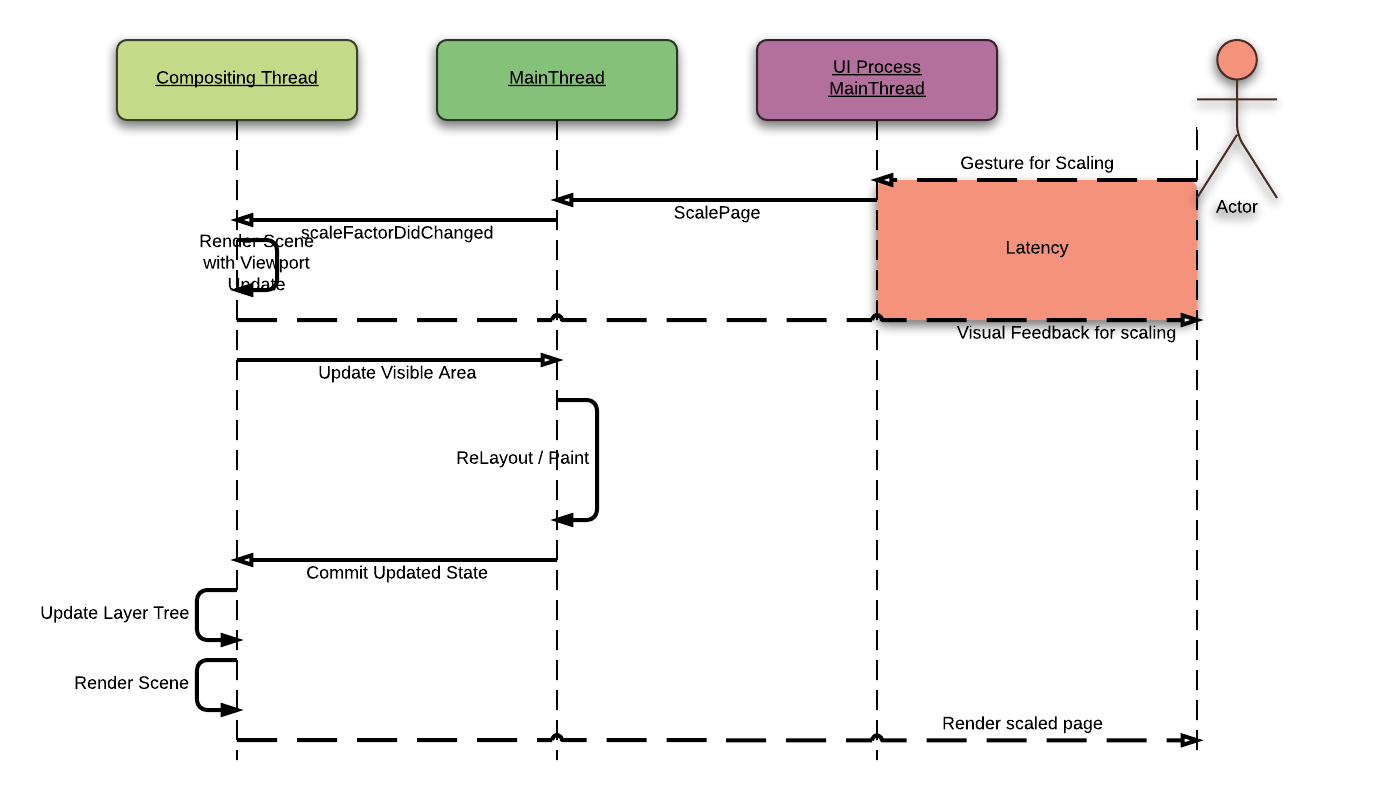 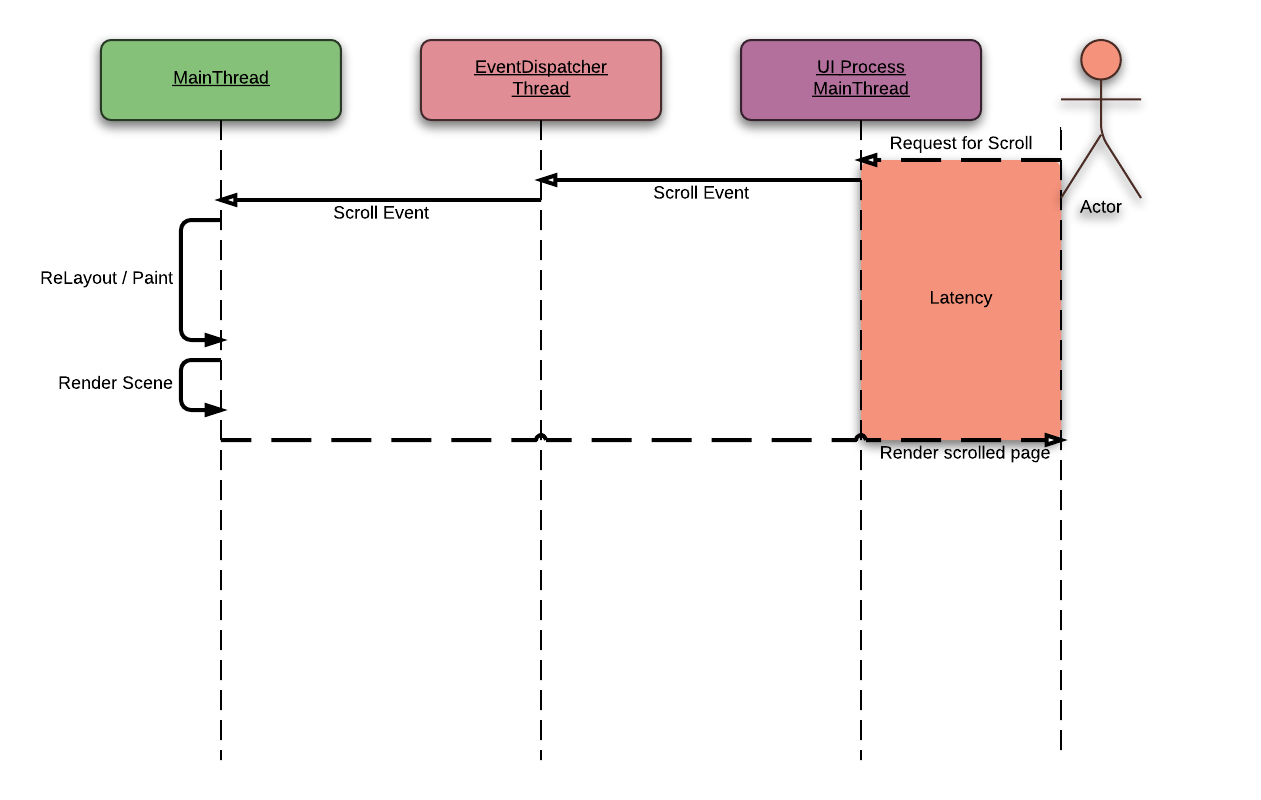 Because the Threaded Compositor uses TILED_BACKING_STORE, it can render the scrolled web page with cached tiles with a minimal latency. During ThreadedCompositor renders a web page, the main-thread scrolls "actual" view. Whenever the main-thread finishes "actual" scroll, these changes are collected by CompositingCoordinator. And these changes are passed to the ThreadedCompositor to update the view. 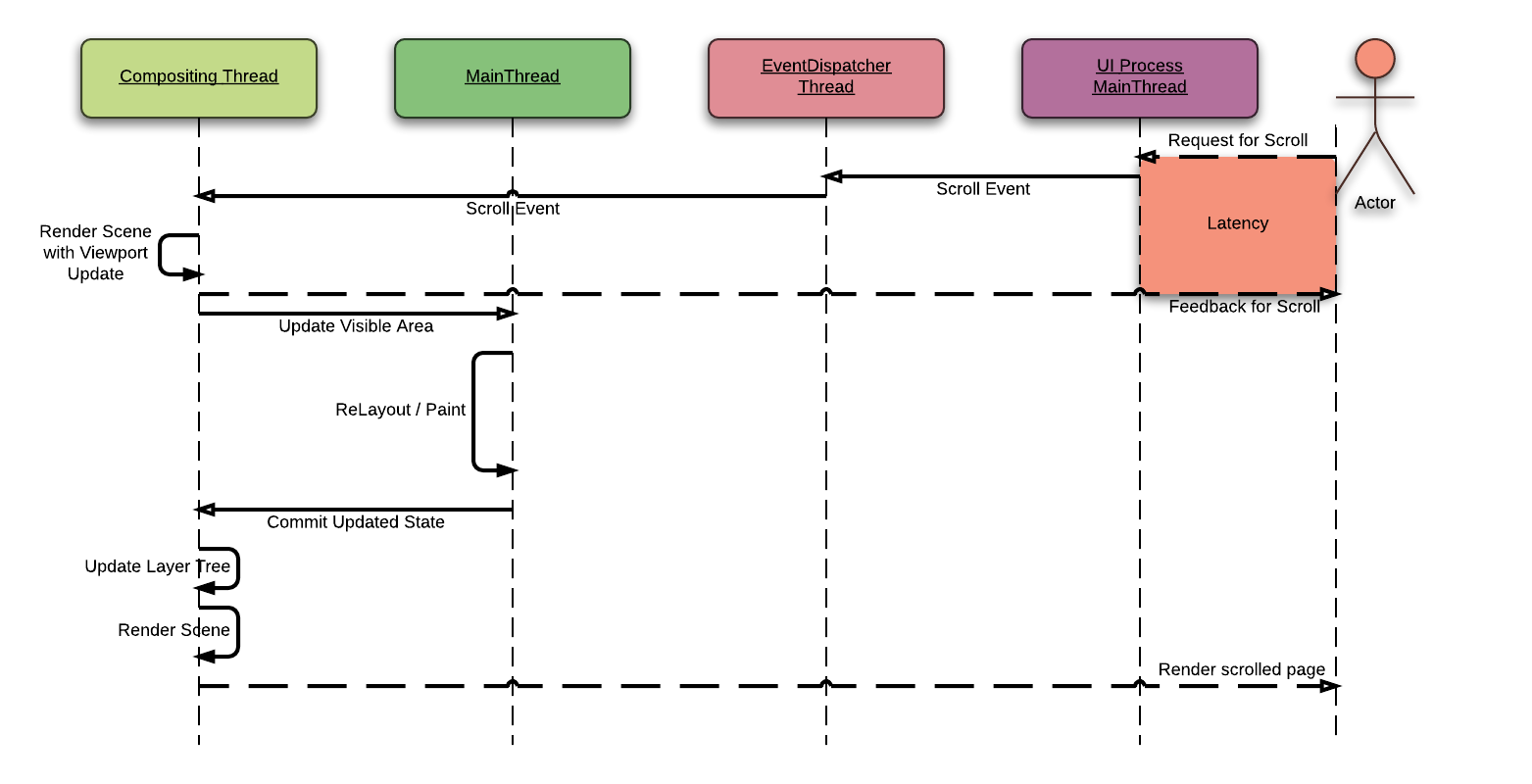 Unfortunately, these optimization is only supported when we are using fixed layout. To support this without fixed layout, we need to refactor TILED_BACKING_STORE in WebKit and implement proper overlay scrollbars in WebKitGTK+.

Compositing the Media and the Canvas

Not only CSS3 Animation and scaling but also the video and canvas can be accelerated by the Threaded Compositor. Because it is little bit out of scope of this post - Because it is not implemented for upstreaming - I’ll only describe about it briefly here.

If the actual renderer of a Media and a Canvas element runs on off-the-main-thread, it is possible to bypass the main-thread entirely. The renderer can calls TextureMapperPlatformLayerClient::setPlatformLayerNeedsDisplay when it updates its result from its own thread. And compositing thread will composite the result without using the main-thread. 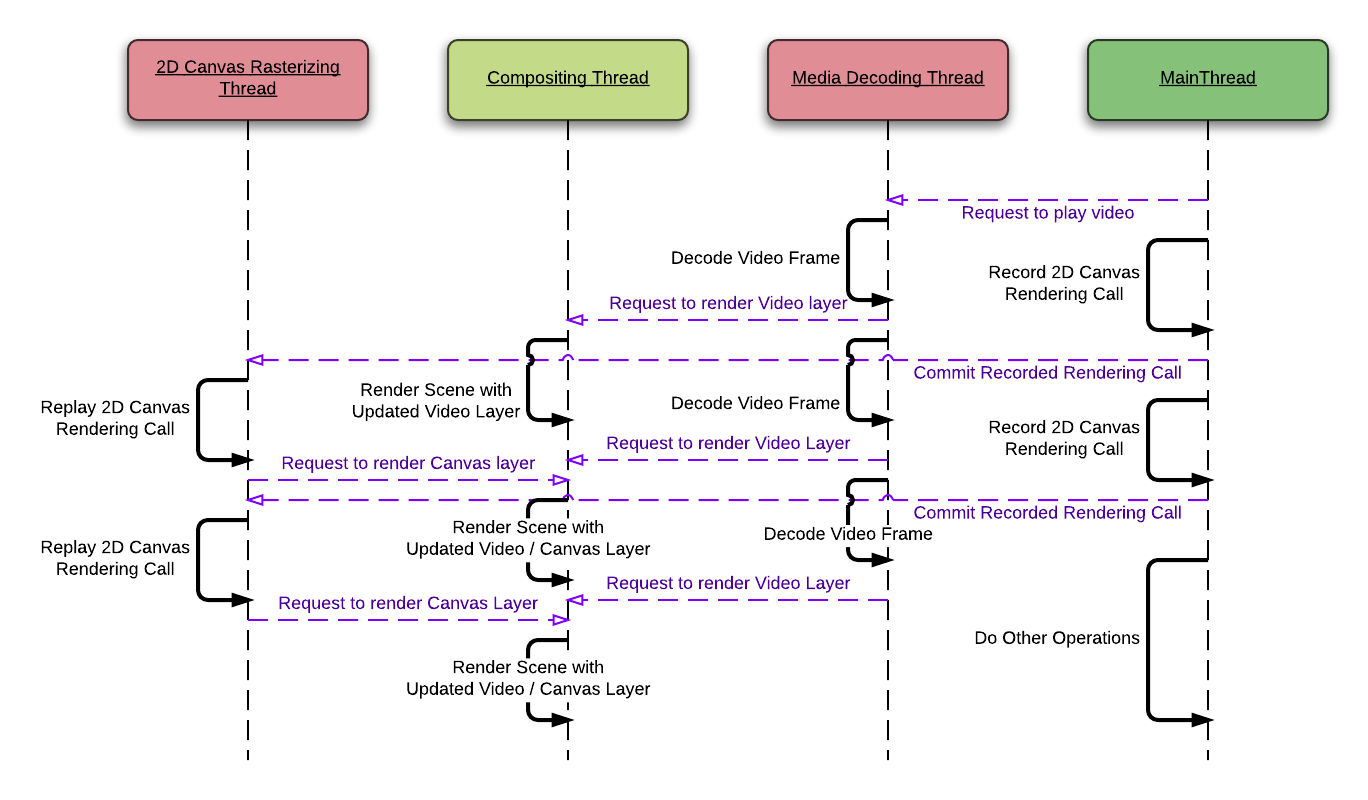 Also, if the target platform supports streams of texture, we can avoid pipeline hazards when drawing video layers in modern mobile GPUs which uses tile based rendering.

This performance comparison was presented in Linux.Conf.AU 2013. It is based on pretty old implementation but it shows meaningful performance improvement compare to plain TextureMapper method. I could not regenerate this result using my current laptop because it is too fast to make stressed condition. I hope I can share updated the performance comparison using the embedded device soon.

I made this diagram to help my understanding during the implementation, but It would be good to share to help others who are interested in it. 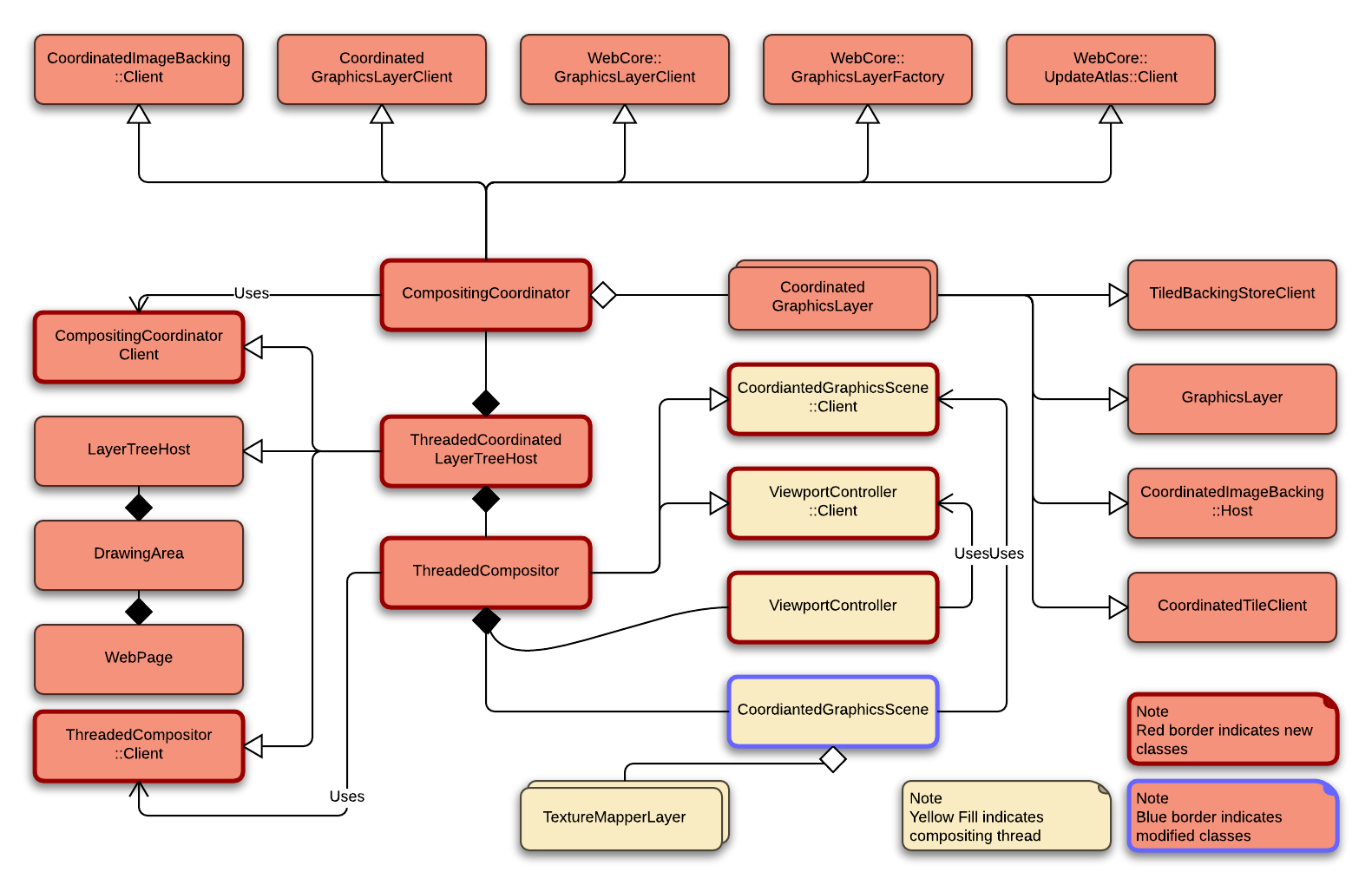 From this point, Threaded Compositor and Coordinated Graphics behaves differently.

In Coordinated Graphics, the collected state changes of the layer tree is encoded and passed to CoordinatedLayerTreeHostProxy in UIProcess. And CoordinatedGraphicsScene applies these state changes to its own TextureMapperLayer tree and renders these on the frame buffer.

Most of re-factoring for Threaded Compositor in Coordinated Graphics side was done in the last year.

However, upstreaming of Threaded Compositor was delayed to various issues. I had to simplify the design (which was quite complicate at that time) and resolve various issues Before starting upstreaming process.

In this year, WebKitGTK+ decided to deprecate WebKit1. Because of that it was possible to make much less complicated design. Also, I fixed the Threaded Compositor not to break current behavior of WebKitGTK+ without fixed layout.

I’m happy that I can start upstreaming process of this implementation, from now on.